EPDM has always been known as one of the most durable roofing products available. Its high UV resistance and ability to stand up to weather over time has made it a very popular flat roofing product, decade after decade. Its ability to resist ponding water on roofs has also made it very popular as a man-made pond liner, among its many uses.

However, EPDM has always had one big weakness: seams and flashings. Alternative single-ply roof systems, like TPO and PVC, can be heat welded. If completed correctly by a knowledgeable crew, a heat weld is the strongest bond available. It essentially welds the flashings and seams together with the base PVC or TPO membrane. With EPDM, heat welding isn’t possible, so the seams are instead bonded together with adhesives.

In the early days of EPDM, seams and flashings were only expected to last 10 to 15 years. The reason was the technology they had at the time, which was a product called splicing cement. On most early EPDM roof systems, the seams were glued together using this method. Some manufacturers used caulking products to hold off water penetrating the seams, which could help buy some time. However, after a period of time, the result would always be the same – open seams and flashings. 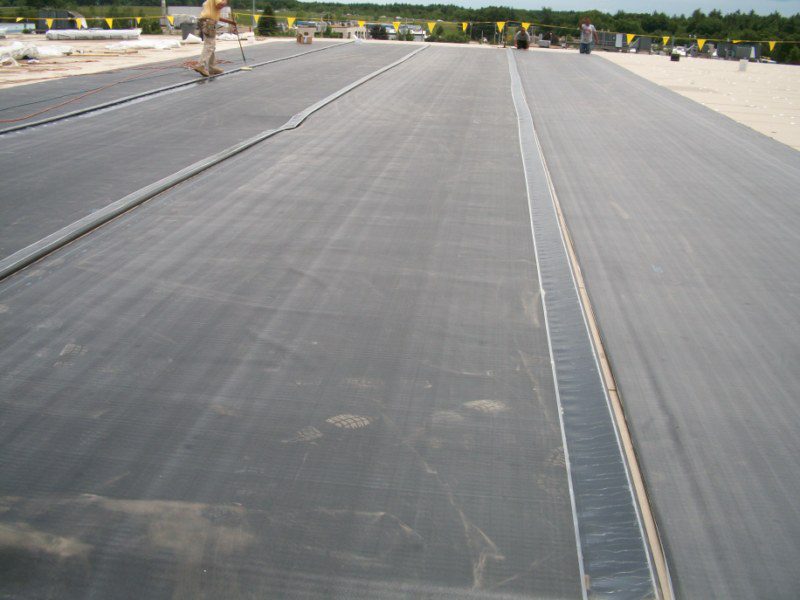 The cure to this problem was an expensive one: re-do all seams and flashings. This means completing most of the detail work on the roof system without actually replacing the roof. This could be an effective solution, particularly if the base EPDM membrane is in good condition.

However, a major evolution in EPDM roofing occurred in the 1990s. Seam tapes and self-adhered cover strips and flashings were invented, which were far superior to splicing cement. This meant that the seams and flashings could last 20 to 25 years, roughly as long as the EPDM membrane itself would last. Finally, EPDM had competitive seams to TPO and PVC. While a heat weld is still a better detail, long-lasting flashings and seams mean that an EPDM roof can be expected to last a similar amount of time as competitive TPO and PVC roof systems without major maintenance.

In the 2010s, these flashings were further evolved to include factory-applied accessories. This means that the seam tape is installed directly to the membrane roll in a controlled factory setting, giving it substantially better bonding capabilities and long term quality.

Seam stripping and re-flashing work are still completed on EPDM roof systems to this day. It is typically completed as a way to extend the life on a roof system, particularly where thicker EPDM was installed (.075 mil, .090 mil, etc.) The same logic applies if the base EPDM is in good shape; the roof life can be extended by re-doing the weak points. However, instead of being a necessity, it is now an option that can be considered in lieu of replacement when the roof is nearing the end of its life.

At Chaffee Roofing we know about roofs.

We can help you through any roofing project.

Our experts will answer your questions.

Call us today for all your roofing needs.

Types Of Commercial Roofing That Are Installed Over Your Old Roofing

Does your old commercial roof need replacing? Are you considering installing a new roof over the old one? Are you worried about choosing the right roof for your building?  We see projects

Roof Proposals – What to Keep an Eye Out For

Making sense of roofing proposals from different contractors offering varying solutions can be very daunting. Just understanding the myriad of solutions can be difficult enough without adding in products, terminology, etc. What

Lifespan and durability are not the same for all roofing materials.  Without getting service from a roofing material, what is the point of your investment? When looking for a replacement roof, or